Alzheimer's I: No It's NOT Just Because There's More Old People!


Since there has been so much fuss over the correlations in Swanson et al., I thought, why not take the dodgiest-looking of those correlations and look into it a little more closely.  For instance, what about their correlation between glyphosate/GMO increases and the growth of Alzheimer’s, suggesting that one could cause the other?  Surely that’s a no-brainer!  As commentators on pro-GMO blogs have already noted, Alzheimer’s is a disease of old age, older Americans are increasing, so naturally there’s an increase in Alzheimer’s—isn’t there?

But wait.  If a growing number of aged was sole or even main cause, then the increase in numbers of old folk should equal (or not much increase) the increase in the number of Alzheimer’s deaths.  If however there turned out to be a discrepancy, with the second figure substantially higher than the first, then some new factor or factors must be causing that increase.

Clearly, some environmental factor that is both new and widely-distributed must be causing that increase.  But why should glyphosate be blamed?  There are several good reasons.

Of all toxic chemicals, glyphosate is the one whose use has increased most dramatically over the last quarter-century.  GMO advocates often state that the growing of GMO crops has reduced the quantity of pesticide sprayed.  That is a half-truth, and, as in every half-truth, the part that isn’t true is false.  “Pesticide” is a blanket term for herbicides, insecticides and fungicides.  It is true that insecticide use has been reduced.  But that is not true for herbicides.  You can make plants toxic to insects, but you can’t make them toxic to weeds.  All you can do is make them resistant to herbicides and then spray indiscriminately, crops along with the weeds.  And that process eventually produces herbicide-resistant weeds, so you have to spray more.  Not to mention the recently-introduced practice of spraying crops, GMOs and non-GMOs alike, with pesticide (mostly glyphosate) so as to dry them out immediately before harvest.  The lie that GMO crops have reduced pesticide use is repeated ad nauseam on GMO sites, but in fact any reduction in insecticide use is more than offset by the increase in herbicide use.  Here’s the truth:

Of all toxic chemicals, glyphosate is perhaps the most multivectorial.   It can enter the human body via air, water, or food.  Since the vast majority of corn, soy and sugar-beet are now glyphosate-resistant, most processed food will carry residues of glyphosate, which--however infinitesimal each one may be—can accumulate over time in the human body.  It follows that there are very few people in the US who have not ingested glyphosate, a fact that makes epidemiological studies difficult, for the following reason. 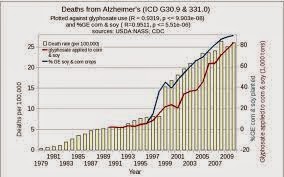 The best way to perform an epidemiological study is by dividing populations into two groups: those that have been affected by the presumed pathogen and those that haven’t.  Tobacco was a classic case.  There were people who smoked and people who didn’t.  If tobacco caused lung cancer, you should find significantly more cases in the second group than in the first.  And you could refine the search—those groups that smoked more should have more cancers than those who smoked less, and the same with lifelong smokers versus those who gave it up.  That’s because smoking a cigarette is a conscious, deliberate choice.

But because there are so many vectors and because none of them involves a conscious decision (in the absence of labeling laws, we have no idea whether what we’re eating has been sprayed with glyphosate or not, whatever our attitude towards GMOs), it’s not possible to determine which sections of the population might be affected and which might not.  But what about areas where there’s been spraying against those where there hasn’t?   Surely there should be some difference between these, if glyphosate was involved.

There are two good reasons why there shouldn’t be.  One, spraying isn’t just farmers in rural areas—it’s golf courses in suburbs, and municipalities in parks, and householders in their own yards.  Two, even if the rural-urban distinction could be made, there’s no reason to believe—contra the facts of tobacco-smoking—that greater exposure to glyphosate would correlate with higher incidence of Alzheimer’s.  Glyphosate is an endocrine-disrupting chemical (EDC), and as I showed in ‘Unsafe at Any Dose?” EDCs can cause damage at doses as small as one part in a billion.  Moreover, an EDC harmful at these levels may be completely harmless at far heavier doses.  The reason’s simple: chemicals can harm you in more ways than one, at more levels than one, and the two different effects can occur at very different dose levels.

That’s why Swanson et al. could deal with the glyphosate/ Alzheimer’s correlation only by taking figures for the whole population.  Which is what leads pro-GMO folk to think that they can explain away the data by repeating their mantra “Correlation is not causation” and drawing phony graphs between rising diseases and any other factor that happens to have gone up in the last couple of decades.  Like this, for example:

“There’s a plethora of items whose prevalence or use has increased during the past 20 years: the number of electronics we own, the number of pedicures women get, the amount of coffee we drink, etc., and each would make an equally convincing graph…”

So says Layla Katiraee, “a Senior Scientist in Product Development at a biotech company in California”.  A similar-looking graph, sure.  But “equally convincing”?  To “a Senior Scientist”?  I doubt if anyone with an IQ above room temperature would think that something meant to beautify your feet would be as likely a cause of death as something designed to kill living organisms.


But how could glyphosate hurt us, when its makers assure us that “Glyphosate inhibits an enzyme that is essential to plant growth; this enzyme is not found in humans or other animals, contributing to the low risk to human health.”  That’s another GMO lie, and it’s already the subject of a California lawsuit.  More on this next week, when I’ll write about the only link still missing from our chain of causal evidence connecting glyphosate to Alzheimer’s: exactly what glyphosate can do to humans, and how it can do it.

Posted by Derek Bickerton at 8:22 PM

Derek Bickerton
Read this blog and you'll learn as much about me as you need to know.